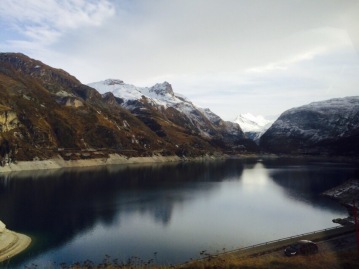 The Travelling Pixie in Tignes

It has actually been almost three months since our snowboarding trip to Tignes, only that I’ve been too busy with school work to write about it.  Now I’ve finally been able to spare some time to write about our brilliant ski trip! (This post was actually drafted since 15 January I noticed!)

We booked our trip through a ski trip agency – Nielsons, about 6 weeks prior to the trip.  As our trip was actually the first week of the season (second week of December 2014), we were able to get a relatively good deal.  £622 for the flight tickets to Tignes and for one week at a catered chalet.  Our deal also included renting the equipment for snowboarding in Intersport – one of the largest snow gear stores in Tignes.

Our flight arrived in Grenoble Airport at 09:30 on 13 December 2014, and we then took a 4 hour coach ride organised by Nielsons to Tignes in hope of yet another amazing ski trip (click here for our first ski trip adventures: Part I, Part II in Austria).  During our coach ride, we bought our Area Ski Pass for 234 Euros and an extra 20 Euros for the ice skating pass.  To our disappointment, Tignes was having the worst snow in 15 years, we arrived not to the long anticipated sheet of white powder snow but the icky half-melted dirty snow :(.  To our further dismay, a lot of the slopes in Le Lac – the area in which our chalet is located – were closed due to the skimpy snow the sky decided to give us

Nevertheless, the next morning we took the free shuttle bus to Val Claret, a 10 minute bus ride away from Le Lac to where more of the slopes are open.  There were too many blue slopes in Tignes in general and it was simply packed with people in Val Claret as the slopes weren’t open in Le Lac.  The slopes also weren’t that snowboarder friendly (especially for semi-beginners like myself) as there were a lot of flat pistes – a killer for us snowboarders as we must undo our bindings and walk with our board to where the gradient is steeper!

Here’s our colourful group photo – I love how we all have different coloured jackets and ski pants, it just makes me feel so vibrant and bubbly!

One highlight of the trip I must say, is actually learning how to build a snowman – probably a really typical activity for those who live in cities that actually snows properly, but having lived in Hong Kong for most of my life, and haven’t been studying anywhere but London and Hong Kong, I have yet to experience a ‘proper’ and ‘authentic’ snow encounter – this was my first!

I’m looking forward to my next ski trip, unfortunately I wouldn’t be able to join my friends for the upcoming ski trip in April as I have to go back to Hong Kong for a work placement, but I know that we’ll soon be going on another trip during our Christmas holiday in 2015. x

One thought on “Snowboarding in Tignes!”