It’s always fun to have friends all over the globe, and since my husband (former boyfriend) is a musician, it was never hard for him to make friends on the other side of the globe while he’s touring. So, last summer, we stayed at his friend’s place in Croatia, a little place called Zaboric. If you’re travelling there from Australia, or anywhere overseas, be prepared for a terrible jet-lag. Seriously.

People in Croatia are extremely friendly, food is absolutely great (and cheap!), so if you ever get a chance to visit it – go for it! We were settled in Dalmatia (east shore of the Adriatic sea) but we eventually visited Istria as well (closer to Italy). Amazing islands are what will take your breath away, and if you have a spare day – visit at least one or two.

One day our friend Anton was kind enough to take us on a trip to Dubrovnik, or as some of you know it – The King’s Landing!

As Anton told us, the city is now swarming with tourists willing to see behind-the-scenes in real life, so there are now organized King’s Landing tours that last for 3 hours.

I guess it must be fun, but we really didn’t have that much time, neither was Anton that much interested in joining us, so we stuck with him showing us around the place.Of course, I was fangirling all the time, so my then-boyfriend-now-husband concluded I saved us time and money since I recognized most of the filming sites. 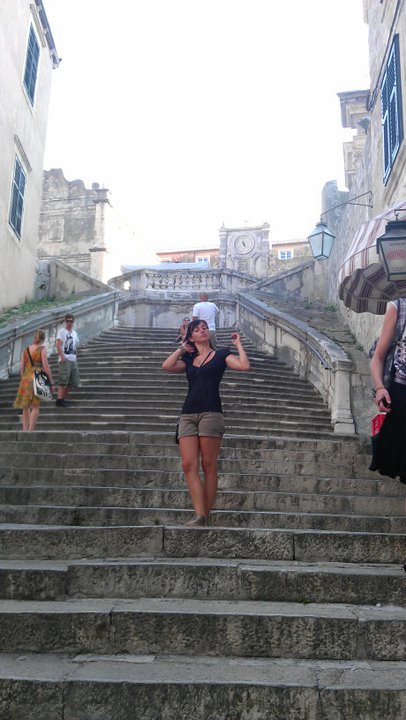 When we arrived at the St Dominika street, I was persuaded to take the walk of shame, since I ate too much ice cream before that. It was around noon, and it was a bit crowdy. Anton mentioned that until Dubrovnik became popular because of the series, you could actually walk the streets and not bump into so many foreigners. All of a sudden, someone from behind started saying “Shame. Shame”, and then one by one, every person around, including us, joined. There was around 15 people climbing the stairs and chanting “Shame” for no particular reason (if you’re not a GoT fan, of course).

I’d suggest passing the aquarium – not worth the entrance fee, the whole place is small and dark. Instead, we went for a walk around the city walls. It was amazing, almost as if you could feel every moment in history they endured, all the battles they stood against. And I’m not talking just about the Baratheons and the Battle of Blackwater Bay, these walls are a real thing. Pro tip: don’t forget the water, because it can get pretty hot (and we’re from Australia).

We somehow ended up in a cafe on the other side of the walls, that overlooks the sea (sorry but I can’t recall how to get there, I guess it’ll remain our secret place).

When the night falls, the whole place turns into a mini festival. Stradun, the main street is filled with performers, people carrying parrots, snakes, musicians, etc. The alleyways of the King’s Landing were filled with set tables from the restaurants in the old buildings. It was impossible to walk through. I claimed that it was just to lure us to order their delicious seafood.

It wasn’t until Anton said it was late, that I realized we’ve spent twelve hours walking and strolling through the old city and its walls. I even felt like I could run away from them and hide like Arya hid from the Lannisters. But I was promised another round of delicious ice cream, so I agreed to come.

If you would like to be a Guest Blogger for annasusanne.com or simply write the occasional guest post, email annasusanne.c@gmail.com to pitch your ideas! – Anna Susanne x