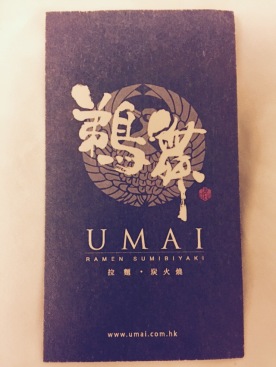 The Travelling Pixie in Hong Kong

Situated in an easily overlooked neighbourhood, Umai is located in the new and upcoming area of Kowloon – D2 Place.

The name of the Japanese restaurant, Umai, besides being the English diction of the name in Japanese kanji, also has a double meaning – the literal meaning of ‘yummy’ in Japanese.

Right after I landed in the Hong Kong International Airport, my dad drove me from the airport directly to Umai for lunch.  Thanks Dad!  For knowing exactly what I want to eat after three months in London!

We ordered two set lunches, one sashimi and one sushi set lunch.  Needless to say, I went for the sashimi set.  The set lunch includes pickles, salad of the day, steamed egg custard, the main course of your choice, a bowl of steamed rice (except for the sushi set lunch) and a portion of miso soup.

I must say, their set lunches are really a great bargain!  The perfect location and price for those having 9-5 office jobs in the area.  The whole meal cost approximately HKD200 per person (less than £20), not cheap for lunch in Hong Kong, but for an authentic Japanese cuisine, it definitely costs less than those restaurants located in the typical business and finance areas in Hong Kong.

Being a greedy little kid, I refused to share my sashimi set with Dad – plus I ended up sneaking a few of the yummy sushi from his plate! 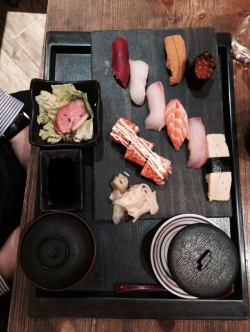 Being a huge fan of zaru udon (cold udon with a soy sauce dip), I ordered an extra portion of zaru udon to go with my sashimi set. I simply HAVE to have it whenever I’m back in HK, they don’t have nice zaru udon in London – unless you’re in a really expensive Japanese restaurant!

Last but not least, I have to introduce to you the Wasabi flavoured ice cream!  I don’t think that its exclusive to Umai, but I haven’t been to any other HK Japanese restaurants in Hong Kong that serves it.  My first reaction upon hearing the name ‘Wasabi ice cream’ was, What?!  Wasabi ice cream?  Seriously?!  Do they just freeze wasabi and serve it?!  Well, first of all, yes seriously!  Wasabi ice cream!  and No, they don’t just freeze wasabi and serve it!  At this point, I was already full to my chest!  Oh gosh!  But nonetheless, my dad suggested that I order one scoop because its his favourite, and that he can always finish it off for me even if I can’t – I think he just wants it for himself!

When the ice cream arrived our table, instead of the expected green goo, what was presented in front of me was actually ice cream in a shade of creamy white.  So I took a teeny-tiny spoonful and gingerly put it into my mouth – I didn’t even know what to expect!  It turned out that the ice cream brought a slightly tingling sensation to my palette – similar to that of wasabi.  It tasted SO unique!  I don’t even know how to put it in words, but I’ll try.

As it melts on my palate, the ice cream slightly singes my tongue.  It’s the wasabi.  Unlike putting a huge cube of wasabi into your mouth, the aftertaste of the wasabi ice cream doesn’t bring tears to your eyes.  You just get a subtle tickle in your nose, then you can’t resist but take another spoonful into your already watering mouth.  If you’re not a big fan of wasabi, you probably wouldn’t want to try this.  But if you are, you’re in for a surprise!

One portion of the set lunch is just the right amount for lunch.  I don’t know about my dad (He could easily devour two set lunches I bet! lol!), but its definitely perfect for me!  The succulent sashimi, the aromatic egg custard steamed to perfection and not to forget the firm and chewy zaru udon is the impeccable lunch treat for me!