Where Bincho used to be, Eat Tokyo has taken over this central location for a decent Japanese cuisine.

With decent Japanese food priced rather high in general, we now have the (relatively) cheaper option of going to Eat Tokyo!  I ordered the Toro ju (£14 with miso soup) and my boyfriend Taylor ordered the Ikura ju (also £14 with miso soup included) – which was in fact quite a bargain considering the amount of sashimi laid on top of the bento box.  We also shared a £50 deluxe sashimi boat amongst seven of us – which was all the sashimi we could ask for!  If you’re looking for a less pricey sashimi boat, there’s also the £35 regular option on offer.

I must say that the toro ju was simply divine.  The rich and fatty tuna melting on my palette every time I put a slice in my mouth.  The toro ju in itself was super filling because of the fatty tuna, I’d say that for a regular dinner, a ju would be definitely enough.  But as I have been starved of good Japanese food for so long, plus we were a seven-persons party, we ordered a whole lot of side dishes, and the bill came to £36 – not bad for all the food that we ordered!

Eat Tokyo is definitely one of the best value for money restaurants I’ve had in London, and I am DEFINITELY going back, just thinking about the food and reviewing these photos while typing this post makes my tummy rumble!  It was such a shame when we found out that Bincho had closed, but I’m more than glad that a new authentic Japanese sashimi/sushi place has opened up. 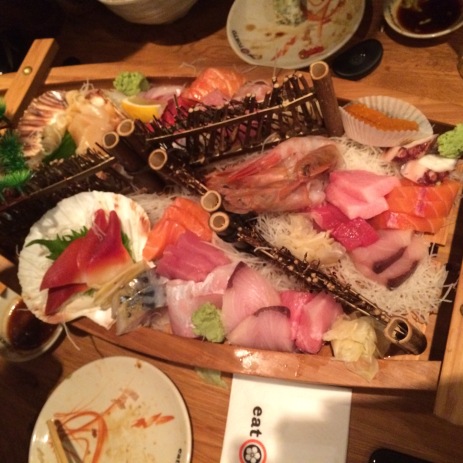 Yum Factor: OFF THE SCALE!